During the event, the cruise missile submarine was rolled out of a production hall and into a filling basin from where it will slip out into the sea for factory and state trials.

Krasnoyarsk is the third of the upgraded Yasen-M (M standing for modernized) boats (Project 885-M). Prior to building the new boats, Russia completed a single Project 885 submarine, the Severodvinsk, in 2011. It was delivered to the navy in 2013, twenty years after it was laid down in 1993.

The first Yasen-M submarine, Kazan, entered service 12 years after starting construction in 2009, while the second is expected to be commissioned by the end of the year.

Krasnoyarsk was rolled out of the hall after beginning construction in 2014. The shipbuilder did not say when the submarine could be handed over to the customer.

Yasen-M submarines displace 13,800 tons while submerged and are equipped with 24 Oniks (SS-N-26) anti-ship missiles and Kalibr (SS-N-27) land-attack cruise missiles in addition to torpedoes. Earlier reports have said that the submarines could potentially be equipped with the new Zircon hypersonic missiles that are being tested.

Russia currently has five more boats in the class under construction. 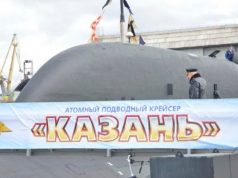 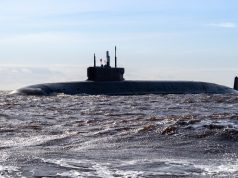 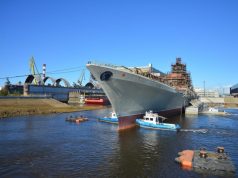