The US State Department has approved a possible sale of 12 MH-60R multi-mission helicopters to Australia.

In addition to helicopters, the government of Australia requested to buy engines, radars, targeting, navigation and communications systems, as well as GAU-61 and M299 Longbow rocket and missile launchers.

The State Department notification to US Congress on the sale approval does not mean a deal has been concluded. Should the contract be finalized, the department estimates the total value of all equipment and support at around $985 million.

The acquisition of the 12 anti-submarine warfare helicopters is in line with Australia’s 2020 force structure plan in which the defense department said it would expand and rationalize the support and logistics helicopter fleet consistent with the expectations for larger naval operations.

Royal Australian Navy currently operates 24 MH-60R delivered by Lockheed Martin between 2013 and 2016 under an A$3 billion contract. RAN Romeos are equipped with AGM-114 Hellfire air-to-surface missiles and Mark 54 anti-submarine torpedoes.

Currently, the navy has capacity to provide at least eight warships with a combat helicopter at the same time, including Anzac-class frigates and the new air warfare destroyers. The remainder are based at HMAS Albatross in Nowra, New South Wales.

The additional helicopters can be expected to operate from the nine new Hunter-class frigates currently under construction.

“This proposed sale will improve Australia’s capability to perform anti-surface and anti-submarine warfare missions along with the ability to perform secondary missions including vertical replenishment, search and rescue, and communications relay,” the US Defense Security Cooperation Agency said in a statement.

“Australia will use the enhanced capability as a deterrent to regional threats and to strengthen its homeland defense.” 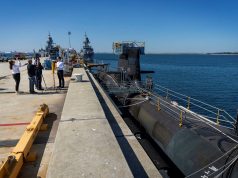