BAE Systems and Sierra Nevada Corporation (SNC) revealed they have been awarded a US Air Force contract for the development of a prototype design for a signals intelligence (SIGINT) payload under the service’s Global High-altitude Open-system Sensor Technology (GHOST) program.

Under the contract, awarded earlier this year, the team will provide a sensor prototype that gives insight into adversaries’ actions by collecting and analyzing electronic signals. It will exploit the radio frequency (RF) spectrum, critical to battlefield superiority, to detect, identify, locate, and track RF emissions.

The duo is joining Northrop Grumman, who disclosed its participation in the prototype sensor project earlier this month.

Both teams say they will be providing an open architecture-based hardware and software solution, capable of being scaled and configured for multiple types of manned and unmanned aircraft.

“Our SIGINT technology is one of the few on the market designed from the start with open architecture,” said David Logan, vice president and general manager of C4ISR Systems at BAE Systems. “We worked closely with the customer community to design our solution in this way – giving the US Air Force the ability to easily add new capabilities in the future to counter evolving threats.”

The project is led by the sensors division within the Air Force Life Cycle Management Center’s Intelligence, Surveillance and Reconnaissance and Special Operations Forces (ISR/SOF) Directorate.

They are looking to use the GHOST program to give them the flexibility to fly on different aircraft using a variety of sensors. In the initial configuration, the sensor will be housed inside a pod attached under the aircraft.

“We are designing it to be platform agnostic, or agile, so it is easily transferable from one airborne platform to another based on however much size, weight, and power, or SWAP, is available,” said Jeremy Shock, Signals Intelligence Branch Chief.

Along with being able to fly the pod under either manned or unmanned aircraft, they are designing an open architecture system to allow them to use different hardware or software depending on the mission and the available SWAP.

“When we say open architecture we’re really talking several different things,” Shock said. “One is how does it interface with the airborne platform itself. Also, how it communicates with the ground. We want common interfaces down to the ground to send common messages down so that they can easily be shared throughout the Intel community.”

The GHOST program has been designated as a Section 804 rapid prototyping program and is currently working a 12 month effort with three vendors to design prototypes. In addition, the government will perform an open architecture assessment on all three vendor’s systems in the AFRL’s Open Architecture Technology Lab. Following that effort, the GHOST team will perform a source selection to select one vendor to build flyable prototypes to continue driving the program towards fielding the system. 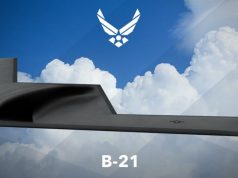 Northrop gets advance procurement contract for B-21 Raider bomber 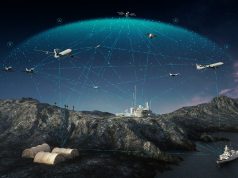