Ships, submarines and aircraft from five nations have gathered in the Philippine Sea for a multilateral exercise led by the Japan Maritime Self Defense Force (JMSDF).

Naval forces from Australia, Canada, Germany, Japan and the US will be taking part in exercise ANNUALEX between November 21 and 30.

While coordinated maritime engagements with international partners are part of routine presence operations for many navies throughout the Indo-Pacific, ANNUALEX 2021 marks the first time in 20 years that the Germany Navy is participating in maritime exercises in the region.

“The invitation to Japan-led ANNUALEX 2021 represents the operational highlight of FGS Bayern’s deployment to the Indo-Pacific region. Being the first German warship in nearly two decades to sail these seas, it is an enormous honor of having the opportunity to exercise with our partner navies within such an impressive maritime force,” said Cmdr. Tilo Kalski, commanding officer of German frigate FGS Bayern.

“The German Navy will strengthen its commitment to the region through deeper security and defense cooperation with regional partners,” said Vice Adm. Kay-Achim Schönbach, chief, German Navy. “Germany would seek to send a frigate every two years to the Indo-Pacific region with a supply ship.”

“Many naval forces (United States, Australia, Canada and firstly Germany) will join this JMSDF exercise. I’m very proud to participate in the exercise as a commander of surface forces,” said Rear Adm. Komuta Shukaku, commander, Escort Flotilla 1. “We will strengthen the cooperation among those navies through this high-end tactical exercise.”

ANNUALEX is a yearly naval training event led by JMSDF. Naval forces from around the world are invited to participate in the event in an effort to strengthen enduring relationships while sharpening naval proficiencies at all levels.

The 2021 iteration of ANNUALEX will take place in the Philippine Sea, off the southern coast of Japan.

“The Royal Australian Navy has enjoyed multiple opportunities throughout this year to work with Canada, Japan, Germany and the United States, building our navy-to-navy skills and forging professional ties”, said Cmdr. Aaron Cox, commanding officer, Hobart-class destroyer HMAS Brisbane. “This robust program of engagement has prepared us well for ANNUALEX as a test of our interoperability.”

“The Royal Canadian Navy is proud to be part of this significant exercise that serves to enhance interoperability and integration among allied and partner nations”, said Cmdr. Doug Layton, captain of frigate HMCS Winnipeg. “Our combined efforts during ANNUALEX help to build confidence in operating with one another and maintain the highest levels of readiness between like-minded navies.”

The exercise is also joined by the US Navy’s Carrier Strike Group 1 (CSG 1), which is led by aircraft carrier USS Carl Vinson (CVN 70). Since arriving in the US 7th Fleet region in early September, CSG 1 units have participated in multiple operations and exercises to include Malabar 2021, and several multi-carrier, multi-nation operations, including the recent Maritime Partnership Exercise (MPX) 2021. 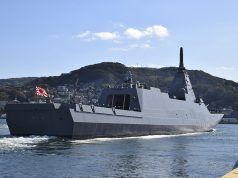