The Royal Australian Air Force has retired the F/A-18A/B Hornets in a ceremony at RAAF Base Williamtown on November 29.

The fighters were officially retired after more than 35 years of service, in a step enabled by the arrival of 44 of overall 72 next-generation F-35A aircraft.

In a fitting tribute to the Hornet, a solo flying display marked its final farewell to the Australian public at the Wings over Illawarra Airshow on November 28.

The first two F/A-18A/B Hornets arrived in Australia on June 6, 1984, partially disassembled in the back of a C-5 Galaxy all the way from St. Louis, Missouri, United States. They were followed by the next two Hornets, flown in a non-stop record-breaking trans-Pacific 15-hour ferry on May 17, 1985.

Over the next 3 decades, 71 Hornets contributed to multiple operations and exercises through the dedication of all aviators at Nos. 3, 75 and 77 Squadron, and No. 2 Operational Conversion Unit.

“We could not conduct our flying operations and exercises without the support of the community, particularly around RAAF Bases Tindal, Williamtown and Darwin – they have supported us for the last 30 years and for that we thank them,” Air Commodore Alsop said.

“The Hornets have contributed to Australia’s air power for one third of Air Force’s centenary, protecting Australia and its interests both at home and on the world stage.

The F/A-18A (single seat) and F/A-18B (twin seat) Hornets have been an integral part of Australia’s air combat capability, capable of air-to-air and air-to-ground missions.

“For the last 20 years, the Hornets have served on multiple operations overseas and at home, including our contribution to strike missions on Operations Falconer and Okra – this was significant as Australia had not dropped bombs in combat since the Vietnam War,” Group Captain Easthope said.

“Flying is my passion and I will always have a soft spot for the Hornet.”

The end of Hornet operations for No. 75 Squadron marks the beginning of a new chapter, as the Air Force transitions to the F-35A Lightning II.

Australia has sold 21 Hornets to Canada, while up to 46 aircraft are being prepared for their sale to US air combat training contractor Air USA. 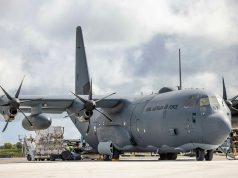