Home Air Poland offers its MiG-29s to Ukraine, urges other operators to do the...
Facebook
Twitter
Linkedin

The government said it was ready to deploy, “immediately and free of charge,” all of its MiG-29 jets to the Ramstein Air Base and place them at the disposal of the government of the United States.

The confirmation follows days of talks and discussions on a potential transfer of fighter aircraft from European countries to Ukraine. In addition to Poland, Slovakia and Bulgaria as operators of the Soviet aircraft were also potential donors of MiG-29 fighters to Ukraine.

Sending MiG-29s to Ukraine was the preferred option as the Ukrainian Air Force has the airframe in its inventory and familiarizing pilots with foreign MiG-29s would not be a significant obstacle.

Poland’s confirmation of the potential transfer follows an announcement from Ukraine’s Air Force Command, which said on March 1 it would be receiving 70 fighters, including MiG-21 and Su-25s, from Poland, Slovakia and Bulgaria.

According to reports, Poland could send up to 28 airframes to Ukraine. While not all of the airframes are operational, Ukraine is said to have the necessary spares to return them to air. The transfer of aircraft would reportedly also be accompanied by the hand-over of R-73 air to air missiles. Reports also said that Ukrainian fighters were already in Poland for “consultations.”

While reports over the past days said either of the potential donors of MiG-29s would expect to receive US F-16s, or “fighters of similar capabilities” in return, the Polish government’s statement indicated that the country would transfer the airframes with no further conditions.

Poland did request the United States to provide it with “used aircraft with corresponding operational capabilities,” adding it was ready to immediately establish the conditions of purchase of the planes.

The Polish government also called on other NATO allies and MiG-29 operators to join it in equipping the Ukrainian Air Force with airframes to fight off the ongoing Russian invasion.

US senator Rob Portman, who sent a letter to president Joe Biden last week offering to work to get Congress to provide the necessary funds for an aircraft transfer, welcomed Poland’s decision, adding that the US administration “should immediately provide a plan to backfill Poland’s planes with advanced fighters like American F-16s.”

“Transfers of these aircraft will help give Ukraine the ability to contest its skies and provide a tremendous morale boost to their military and the people of Ukraine. This is an important step in our efforts to use every tool at our disposal to help our ally,” Portman added.

It should be noted that Poland already operates F-16 fighters, in addition to having the F-35 on order.

In response to Poland’s announcement, the US defense department took issue with the proposed plan that would place the decision of handing over the fighters to Ukraine in America’s hands.

“As we have said, the decision about whether to transfer Polish-owned planes to Ukraine is ultimately one for the Polish government,” Pentagon Press Secretary John F. Kirby said.

“We will continue consulting with our allies and partners about our ongoing security assistance to Ukraine, because, in fact, Poland’s proposal shows just some of the complexities this issue presents. The prospect of fighter jets “at the disposal of the Government of the United States of America” departing from a U.S./NATO base in Germany to fly into airspace that is contested with Russia over Ukraine raises serious concerns for the entire NATO alliance. It is simply not clear to us that there is a substantive rationale for it.”

He added that the US would continue to consult with Poland on the issue, but added that the department believes that Poland’s proposal was “not a tenable one.” 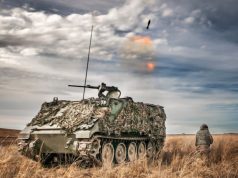