The United Kingdom has announced it would be deploying its brand new Sky Sabre medium-range, anti-air missile system to Poland with about 100 personnel to help protect her airspace.

The UK defense secretary announced the deployment last week, adding that the UK would also be providing Starstreak, a high velocity anti-aircraft missile system, to Ukraine which complements the other military aid already provided by the UK armed forces.

Troops from 16 Regiment Royal Artillery, who operate Sky Sabre have been preparing at their base, Baker Barracks on Thorney Island, to deploy their equipment out to Poland. The deployment is part of measures undertaken by NATO allies to increase deterrence against Russia, which launched a military offensive in Ukraine in February.

Speaking of the deployment, the Commander of 7 Air Defence Group, Colonel Graham Taylor said, “In a bi-lateral agreement between the UK and Polish governments, the British Army will provide a ground based air defense capability in a defensive posture to Poland to augment Poland’s own air defense assets and provide a more layered capability.

“A lot of the soldiers here are pretty well experienced in operations and have deployed all over the world during the last few years. I can tell you that all the soldiers here today are looking forward to making this contribution.”

Its operators say it can hit an object the size of a tennis ball travelling at twice the speed of sound and as impressive as that sounds, Sky Sabre can do that to 24 separate targets travelling at supersonic speed simultaneously. Sky Sabre can be used to engage fast fighter jets, attack helicopters, drones, laser guided smart bombs and cruise missiles.

The supply of Starstreak missile systems to Ukraine was also announced last week. In service with the British Army since 1997, this missile reaches speeds in excess of three times the speed of sound and is capable of taking down fast jets, drones and against helicopters it is particularly devastating. It is the individual light role shoulder launcher variant, which is ideal as a ‘pop up’ and fire capability that is being provided to Ukraine.

The UK’s announcement on the deployment of the systems follows the Dutch and German decision to deploy Patriot air-defense systems and troops to the new NATO battlegroup in Slovakia. The Dutch defense ministry said the systems would arrive in Slovakia in April and remain deployed for a maximum period of six months. 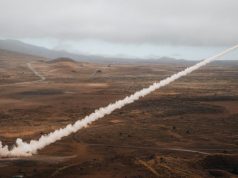