The Dutch defense ministry has announced plans for the procurement of new electronic warfare (EW) systems for the Dutch Army.

According to the defense ministry, the new EW solution will replace the one housed on the Fuchs armored wheeled vehicles, which the army has been using since 1989.

The systems carried by the Fuchs vehicles are now outdated, and have reached the end of their technical and operational life.

“The new capabilities are desperately needed to allow us to more actively safeguard the security of the Netherlands and Europe. There is a need for means to disturb, neutralize, mislead and/or manipulate an adversary by using the electromagnetic spectrum (EMS),” Dutch state secretary Christophe van der Maat said in written testimony to the House of Representatives.

As envisioned, the new EW system is expected to be capable of establishing temporary and local dominance in the EMS. In this way, the armed forces can protect its own operational information and command and control systems. In addition, the EA systems to be acquired are also capable of performing contemporary tasks in the context of cyber ​electromagnetic activities (CEMA).

The Netherlands plans to collaborate with Germany in the project, as Germany will also need to update its capabilities in the field. The two countries signed a letter of intent with at the end of 2020 for collaboration in the field of electronic warfare. 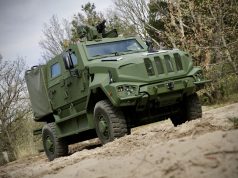