This first-ever test was conducted at the Nevada Test and Training Range in February this year, the air force said.

Through post-shot analysis of video, photo imagery, and visual inspection of the targets, analysts were able to ascertain the battle damage inflicted upon the tanks and determine that the tanks were rendered inoperative.

“A typical A-10 gun employment uses 120 rounds, which means an A-10 is capable of employing fires on nine to ten targets before exhausting its gun munitions,” said Maj. Kyle Adkison, 422nd TES A-10C division commander. “Against large fielded forces, A-10 formations are capable of engaging nearly 40 armored vehicles with 30 millimeter munitions. That’s a significant amount of firepower.”

“This has been an ongoing test effort since the idea originated in 2020,” said 1st Lt. Christopher Earle, 59th TES A-10C operations test analyst. “Now that it’s come to fruition and proven successful, we will work towards testing other types of anti-armor munitions in the air force inventory against ERA and collect more data.”

The A-10 is well suited for agile combat employment roles, and this test proves the A-10 can continue to deliver massive rapid firepower with devastating effects on enemy vehicles in a contested environment, the air force said. 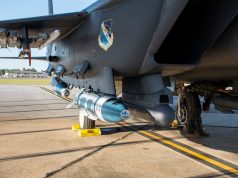