The contract was awarded by the Defence Equipment and Support (DE&S) Future Capability Group (FCG) and would see the Rotary Wing Uncrewed Air System (RWUAS), also referred to as “Proteus,” undertake its first flight by 2025.

Testing the viability of larger uncrewed aircraft for the Navy, the three-ton demonstrator – less than a fifth of the weight of a Merlin helicopter – could provide an innovative alternative to existing aircraft for tracking adversary submarines, the UK defense ministry said.

Trials will test the capability of the aircraft to drop sonobuoys – small tube-shaped buoys that track and communicate submarine activity – enabling the aircraft to alert a crewed helicopter such as a Merlin and call for support if a submarine is located.

Designed to operate at lower cost than crewed aircraft, capabilities derived from the demonstrator could also reduce the exposure of Royal Navy personnel to hostile threats.

Leonardo noted it is already involved in a number of uncrewed research and innovation programs ranging from advanced air mobility to uncrewed combat air, counter-UAS technologies and uncrewed traffic management. The company has demonstrated its expertise and capabilities in the sector during major European exercises such as Unmanned Warrior, Italian Blade and OCEAN 2020.

“The global threat is changing, and it is crucial we remain at the forefront of defense innovation. Exploring cutting-edge, new defense capabilities through programs with key British manufacturers, will help to ensure our Armed Forces are equipped to deal with the latest threats,” UK defense procurement minister Jeremy Quin said.

If successful, the new aircraft would provide a platform capable of delivering improved surveillance and intelligence, enabling crewed Navy helicopters to re-deploy on alternative missions if required and bolstering UK defense capability.

Capable of carrying a large load, combined with the ability to operate in harsh environmental conditions, the aircraft could also demonstrate its utility across a range of requirements. Beyond ASW, the project will assess other potential uses including ship-to-ship resupply and casualty evacuation. 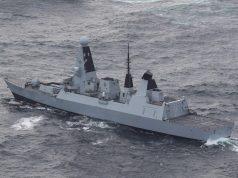