After first reports on Ukraine’s use of anti-radiation missiles against Russian targets emerged in the past days, the US defense ministry has confirmed the missiles were part of previous defense aid packages.

Announcing an additional $1 billion in security assistance, US Under Secretary of Defense for Policy Colin Kahl said “recent packages for Ukraine included a number of anti-radiation missiles that can be fired off Ukrainian aircraft.”

The US defense ministry did not previously disclose the transfer of such capabilities.

Kahl did not specify the type of the missile that was sent, nor which Ukrainian aircraft can employ these missiles that seek out enemy radars employed by air defense systems and destroy them.

Russian channels have posted images of what appear to be the remains of an AGM-88 HARM antiradiation missile. A fragment of the HARM’s BSU-60A/B stabilization fin can be seen in the wreckage.

The missile was reportedly fired at a Russian position. pic.twitter.com/GCNA55CJdj

Kahl confirmed the transfer of the missiles as he detailed a record Presidential Drawdown that will provide additional ammunition, weapons, and equipment.

In total, the United States has now committed approximately $9.8 billion in security assistance to Ukraine since the beginning of the Biden administration. 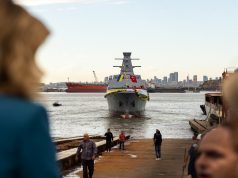