During the special test event, as the trial is being referred to by the Army, soldiers used the IBCS, Patriot and Sentinel radars with adapted Patriot launchers using Patriot interceptors to take down the cruise missile.

“The success of this test confirms that IBCS is advancing along the right path in becoming the foundation of our nation’s modernized Air & Missile Defense capabilities. I want to thank all our outstanding Soldiers who proved, once again, to be remarkably effective in their mission of standing prepared to defend our Nation.”

IBCS serves as an integrated command-and-control system by blending different air and missile defense sensors and weapon systems under a unified network. The Army began the Initial Operational Test & Evaluation for the system earlier this year, intercepting ballistic and cruise missiles while under a simulated electronic attack.

According to the service, preliminary indications are that the latest flight test objectives against the cruise missile threat were achieved, and the target was successfully intercepted.

“This successful test confirms that IBCS is well positioned to combat the present and future threats to our Nation and allies,” said Army Col. Chris Hill, Project Manager of the IFMC Project Office, Huntsville, AL.

“I want to thank the outstanding Soldiers from 3-43 ADA BN and the Integrated Fires Mission Command Office who, once again, showed their remarkable professionalism and resilience in demonstrating this capability in support of our Nation’s defense. We will continue to be responsive to Warfighter requirements and work as an integrated team committed to modernizing our Army.” 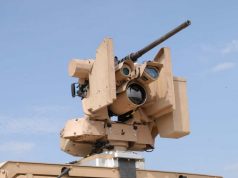