NATO has welcomed its first Alliance Ground Surveillance (AGS) as the remotely-piloted aircraft landed in Sigonella, Italy, on November 21.

The first of five aircraft took off on Wednesday, November 20, from Palmdale Air Base in California, and landed 22 hours later in its new home at the AGS main operating base, according to plan.

Based on the US Air Force block 40 Global Hawk, the NATO RQ-4D aircraft has been uniquely adapted to NATO requirements, to provide an intelligence, surveillance and reconnaissance capability to NATO.

Companies from across NATO’s member nations, including Leonardo, Airbus and Kongsberg, comprise the Northrop Grumman-led industry team that developed the NATO AGS capability.

“I welcome the arrival of the first Alliance Ground Surveillance aircraft in Sigonella. This demonstrates that NATO Allies are committed to modernizing the Alliance and investing to deliver key cutting-edge capabilities to the benefit of our shared security”, said the NATO Secretary General Jens Stoltenberg in Brussels.

All Allies will have access to data acquired by AGS, and will benefit from the intelligence derived from the surveillance and reconnaissance missions that AGS will undertake.

All five systems are currently performing different stages of developmental test flights. Once each of the aircraft arrives at the Main Operating Base in Sigonella, a verification phase will start, in order to ensure full compliance of the system.

The entire AGS system will be handed over to the NATO AGS force once it has completed all its testing and performance verification. Initial operational capability is expected for the first half of 2020. 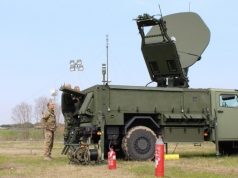