The Australian defense ministry has announced that it is buying JCREW next-generation electronic countermeasure systems to combat the threat of improvised explosive devices (IED).

The Australian government is set to buy the jamming devices as part of stage one of the Joint Counter Improvised Explosive Device Capability Project (LAND 154 Phase 4).

Australian defense minister Linda Reynolds said this proposed acquisition was part of the federal government’s AU$1 billion investment in counter IED capability over the next 10 years.

“Australian forces have used countermeasure systems against the persistent threat of IED attacks in Iraq and Afghanistan, and this new technology will only improve their ability to save and protect lives on operations around the world,” minister Reynolds said.

In 2020 the government will consider the purchase of the full complement of systems. However an upfront investment of $88 million will deliver 80 mounted and 115 dismounted systems, which will progressively be brought into service from 2022/23.

The investment is part of a broader plan to modernize the Australian Army, which includes new Boxer combat reconnaissance vehicles, infantry fighting vehicles, and self-propelled howitzers. 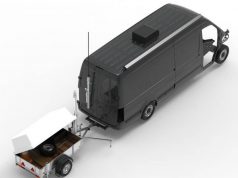