The project, named Airborne Electronic Attack, is led by Spain with the participation of France, Italy, Germany and Sweden. These five countries collaborate within the EU Permanent Cooperation Structure (PESCO), a formula that allows partner countries to sign agreements to move forward quickly in their defense integration.

Indra said the latest generation of air defense systems would make it impossible for a combat aircraft to fly in their protected area without an electronic protection system such as this one.

The technology that will be developed by Indra within the consortium formed by top European defense companies will strengthen the safety of aircraft involved in international, surveillance on EU territory or cross-border cooperation missions.

The new system will be inter-operable with the military assets available in NATO countries for operations taking place simultaneously in multiple theaters: land, sea, air, space and cyberspace.

The project will cover the design, development and proof-of-concept of the capability to interfere in multiple ways with enemy electromagnetic systems, thus covering a wide frequency spectrum. This includes individual jamming capability, joined jamming capability with other platforms and jamming in escort mode.

It will be based on existing technologies currently available within the European industry, including cyberelectro-magnetic capabilities.

The system will follow a modular, scalable and flexible development to facilitate its integration, both integrated into the avionics of the platform and carried in external pods.

The purpose of this system is to prepare an aerial platform to carry out missions such as suppressing enemy air defenses (SEAD), escorting other platforms, carrying out unconventional attacks and providing attack support, the company explained. 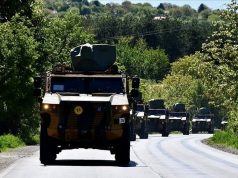