Slipping into the battle group for the second time alongside HMS Northumberland and tanker RFA Tideforce is the Norwegian Navy’s newest frigate HNoMS Thor Heyerdahl.

It’s the last act of a busy three months away for the Portsmouth-based carrier which hosted British F-35 Lightning jets for the first time at sea – followed by US Marine Corps doing the very same.

The future flagship embarked three UK jets from 17 Test and Evaluation Squadron (TES) based at Edwards Air Force Base in California, as well as three which crossed the Atlantic from RAF Marham.

The 5 week operational test phase, headed up by the Air Warfare Centre, was designed to provide ‘end-to-end’ testing of the jets and the combined Royal Navy and Royal Air Force personnel who operate and support the squadrons.

The tests included: mission briefs; preparation of the jets – including arming them using the ship’s unique automated weapon handling system; launching; fighting the mission (including weapons drops) and returning to Queen Elizabeth.

The training reached its climax with four UK Lightnings launched from the deck within seconds of each other to fight their mission.

At the same time USMC F-35s flew to and from the ship, exercising their processes ahead of a detachment deploying alongside UK jets on the carrier’s maiden operational deployment in 2021.

Supporting the strike group throughout have been Merlin helicopters from 820 Naval Air Squadron based at Culdrose, providing anti-submarine protection and search and rescue capability and 845 Naval Air Squadron acting as ‘workhorses’, transporting stores and equipment, providing rescue cover and also landing Royal Marines from Lima Company, 42 Commando, to practice saving personnel from behind enemy lines. A Merlin from 814 NAS and Wildcat from 815 completed the Air Group.

HMS Dragon made up the final element of the task group; she arrived back in Portsmouth on Monday ahead of the main group which is due home before the end of the week.

Captain James Blackmore, Commander of the Air Group, added: “The five-week period of operational tests with UK F-35s was significant and historic.

“As the last pilot to fly Harrier from the deck of HMS Ark Royal in 2010, it filled me with tremendous pride to see UK fixed wing aircraft operate once more from a British carrier.

HMS Queen Elizabeth also conducted warm weather trials on her propulsion systems and expanded the operating envelope of her aircraft in warmer temperatures. Her final task was to provide a venue for the second joint UK-US Atlantic Future Forum and Defence Trade Expo whilst at anchor off Annapolis.

The forum provided a platform for innovators, business leaders and tech entrepreneurs across government and industry to explore emerging cyber, artificial intelligence and space trends, technologies and threats. 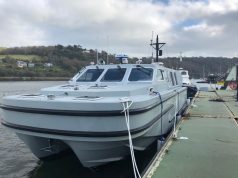 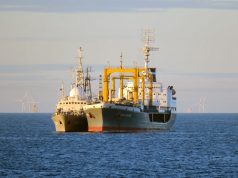