The Skeldar V-200 unmanned aerial system (UAS) has arrived in Canada where it will now be prepared for a deployment with the Royal Canadian Navy next year.

Developed and delivered by UMS Skeldar, a joint venture between Sweden’s Saab and the Swiss UMS Aero Group, the V-200 will provide intelligence, surveillance, target acquisition and reconnaissance (ISTAR) services to the Royal Canadian Navy and Special Operations Forces Command, for both domestic and international operations.

The V-200 is a heavy-fuel vertical takeoff and landing system with a maximum takeoff weight of 234 kilograms. It has an endurance of up to five hours.

UMS Skeldar is supplying the systems as part of a C$51 million contract signed between QinetiQ and Canadian Armed Forces in 2018. In addition to UMS Skeldar, QinetiQ will work with Canadian-UAV, Leonardo, UMS SKELDAR and Wescam to deliver the ISTAR services.

The arrival of the first V-200 to Canada was revealed by the Royal Canadian Navy Commander, Vice Adm Art McDonald. The details on how many unmanned systems would be deployed, and on which ships, are yet to be disclosed. 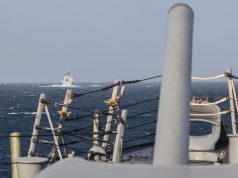