Chief of Army, Lieutenant General Rick Burr AO, DSC, MVO said the acquisition of the Spike LR2 system will contribute to the army maintaining a competitive edge against evolving threats.

The defense ministry added that the Army was currently also considering options to address a medium range direct fire support weapon capability, which will be presented to the Australian government for consideration in 2022.

“The alignment with the combat reconnaissance vehicle (Land 400 Phase 2), will also enable army to deliver improved operational effects for the ADF in sustainment, training and maintenance.”

The Spike range of missile systems is a multi-platform, multi-mission and multi-range electro-optical missile family. The 13 kilogram missile has a range of 5,5 kilometers when launched from the ground and features fire-and-forget capabilities, as well as fire, observe and update, allowing attack of hidden targets. 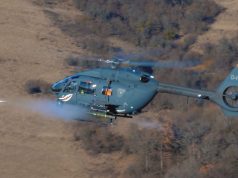