The builder of the Joint Light Tactical Vehicles (JLTV) for the US Armed Forces has received a $407.3 million contract modification for the production of JLTVs for Lithuania and Slovenia.

The order also includes vehicles for the US Marine Corps, according to the company.

A Pentagon announcement says that Wisconsin-based Oshkosh Defense is scheduled to complete work under the contract by January 2022.

The latest modification comes two months after the company received an $803.9 million contract for the production and delivery of 2,721 to the US Army, US Marine Corps, US Air Force, and US Navy.

In addition to the US, Lithuania and Slovenia, the JLTV is being acquired by Montenegro, which signed a contract for tor the acquisition of the vehicles in October 2019.

Slovenia and the US signed an intergovernmental letter of offer and acceptance for the purchase of 38 JLTVs in October 2018. Lithuania signed the same document in November 2019; for the delivery of a total of 200 units.

The Oshkosh JLTVs are air-transportable (CH-47 and CH-53 helicopters; C-130, C-5, C-17 and A400 Cargo fixed-wing aircraft) and can be delivered in a multitude of versions ranging from general purpose to heavy guns carrier. The vehicles come with integrated C4ISR capabilities and have a payload of 2,313 kg in the two-door configuration, and 1,587 kg in four-door configuration.

The US Armed Forces are buying the JLTV as a replacement for the Humvee (High Mobility Multipurpose Wheeled Vehicle) that entered service in the 1980s. The acquisition is led the US Army, in collaboration with the US Marine Corps.

Oshkosh Defense gets $23.7M for ROGUE-Fires deliveries to US Marine Corps 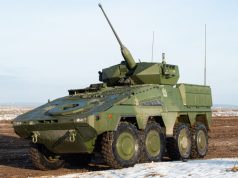