Several months after the US Air Force revealed its plans to have the B-1B Lancer bomber carry hypersonic weapons such as the AGM-183 Air-launched Rapid Response Weapon externally, the service put the concept to the test.

As disclosed by the air force, the bomber’s expanded carriage capabilities came one step closer to fruition following an external captive carry flight over the skies of Edwards Air Force Base, California, Nov. 20.

The flight featured a B -1B Lancer assigned to the 412th Test Wing’s 419th Flight Test Squadron, Global Power Combined Test Force, and carried an inert Joint Air-to-Surface Standoff Missile under an external pylon for the first time.

This demonstration may pave the way possibly for the B-1B to carry hypersonic weapons externally.

“Adapting a small number of our healthiest B-1s to carry hypersonic weapons is vital to bridge between the bomber force we have today, to the force of tomorrow,” said Gen. Tim Ray, Air Force Global Strike Command commander. “This is a major step forward in our global precision fires capability and it is important we pursue these technologies to remain ahead of our competitors. My goal is to have a limited number of B-1s modified to become the roving linebacker of the western Pacific and the North Atlantic.

The captive carry flight was the culmination of the numerous ground tests that began with last year’s expanded carriage demonstration that included a modified internal bomb bay, which featured a moveable bulkhead. The demonstration showcased a configuration of the B-1 that would allow the aircraft to carry larger-sized weapons both internally and externally.

“We’re essentially displaying our external weapons carriage capability,” said Maj. Bret Cunningham, a B-1B test pilot with the 419th FLTS. “We have a JASSM weapon on what is traditionally the targeting pod pylon on the forward right hard point, so we are demonstrating that the B-1 has the capability to carry weapons and employ them externally.”

This extensive engineering review will help the Air Force understand areas where it needs to focus on to maintain the B-1B as a multi-mission weapon system, potentially laying the groundwork for integration of future weapons on the aircraft.

The B-1B was initially designed to incorporate a moveable bulkhead and usable external hard points for its original nuclear mission, however the US shifted the Lancer’s mission to conventional weapons in 1994. The physical conversion to conventional-only armaments started in 2007 with the Strategic Arms Reduction Treaty (START), and was finished in 2011.

The current expanded carriage demonstrations will keep the aircraft compliant with the New START agreement, which means the Lancer can once again utilize those features while delivering conventional weapons.

“Since the long bay demo last year this has really been our key focus point in 2020; getting ready for this external weapons release demo as kind of the next step in that progression towards external weapons carriage and hypersonic capabilities for the B-1,” Cunningham said. “We’re pretty close to the culmination of this demo event and reaching that next milestone.”

The demonstration could mean a potential boon for combatant commanders as the increase in weapons stores remedies an immediate shortfall due to the limited number of strategic bombers. The proposed increase in capacity means that two bombers would equal to three bombers’ worth of weapons.

Following the captive carry mission, engineers will then review the data gathered from the flight before moving on to the next of phase of the demonstration; an external weapons release.

“For us, we’re looking to do this safely, since this is the first time we will release a weapon from the external hard point in over 30 years,” said Agustin Martinez, project test lead. “So we pretty much focused on doing a safe build up approach…to make sure the JASSM and the B-1 are communicating correctly; the JASSM has correct surface deployment timelines so once it does get released it will safely separate.”

Engineers within the Air Force Test Center enterprise, B-1 system program office and Boeing will verify both the weapon’s and pylon’s integration with the B-1B. They are also interested in the physical effects, software, and flying qualities of the new shape on the outer mold line of the aircraft, Cunningham explained.

Despite the potential expansion of capability, the air force said the demonstration does not affect the service’s request to retire 17 of its 60 B-1B bombers in 2021. 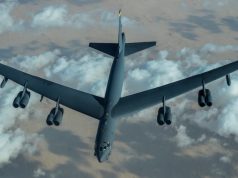