The Pakistan Navy held a live-fire drill in the North Arabian Sea on January 12, during which it sank another one of the former Royal Navy Amazon-class frigates.

Pakistan acquired a total of six Amazon-class (or Type 21) frigates in the 1990s as they were retired from Royal Navy service.

Just last year, Pakistan sank Type 21 frigate PNS Tippu Sultan, which was formerly known as HMS Avenger, in a similar drill. It is yet unclear exactly which ship was used as the target in most recent exercise.

According to video footage shared by the Pakistan Navy, the target ship was hit by ordnance from an Agosta-class submarine and a Zulfiqar-class frigate.

The service said that multiple submarines “engaged their intended targets with anti-ship missiles and torpedoes.” 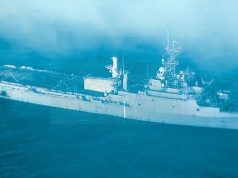