Spanish shipbuilder Navantia has entered into a memorandum of agreement with NAVIRIS, a 50/50 joint venture company between Italy’s Fincantieri and France’s Naval Group, for cooperation on the European Patrol Corvette (EPC) program.

EPC is a flagship project of the European Unions’ Permanent Structured Cooperation (PESCO) program and will see four countries work together on the development of a corvette prototype by 2026-2027.

Envisioned as an affordable, interoperable and flexible vessel, the EPC will be a surface combatant capable of carrying out diversified missions, primarily aimed at enhancing maritime situational awareness, surface superiority and power projection.

European shipbuilding majors announced the signing of the memorandum of understanding after the European Defence Agency approved the launch of a project to contribute to the development of the EPC in January this year.

The European patrol corvette will be about 100 meters long and displace 3,000 tons. It is expected to replace several classes of ships, from patrol vessels to light frigates, in the near future (from 2027 onward).

The ships will be based on an open plug-and-play architecture which will facilitate the versatility of response in the framework of EU common security and defense policy (CSDP) operations and will provide a quick reaction capability, applicable to a broad range of scenarios.

Naviris and Navantia will coordinate their work on the development of the EPC with Fincantieri and Naval Group, the signatories said in a statement. The studies could potentially benefit from European Union and national funds and could result in improved interoperability and digital data management between all sides. 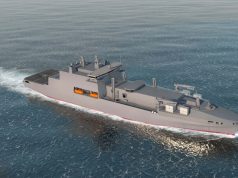