French missile specialist MBDA has announced a contract for the delivery of the next generation of Teseo missiles to the Italian Navy.

Teseo Mk2/E is a new system that builds on the legacy Teseo family, known worldwide as OTOMAT, and introduces improvement in anti-ship capabilities.

MBDA says Teseo Mk2/E will engage both sea and land targets at very long range, with full mission control throughout the missile flight. It will also feature integrated mission planning and a new RF seeker, with options for additional features and capabilities in the future.

The Teseo Mk2/E missile system will equip the next generation destroyer (DDX) and could replace the previous Mk2/A version onboard FREMM and Horizon-class frigates. OTOMAT MK2 has been in service since the 1970s.

The company said the new generation of missiles is a response to evolving threats that generate the need to evolve operational requirements. the missile is also a result of joint MBDA and Italian Navy technical and program activities over the past three years that matured the concept of this system.

“MBDA Group considers Teseo Mk2/E as a major program and will be fully committed to the successful outcome of this new development. The new Teseo Mk2/E builds on a product line that is well recognized around the world and will support long into the future, the attractiveness of our naval products on export markets,” Eric Béranger, CEO of MBDA, commented.

“The Teseo Mk2/E has been defined and designed thanks to an intense collaboration between the Italian Navy and MBDA. This new anti-ship missile will mark a step change in the OTOMAT/Teseo family, keep up with ever evolving threats and feature advanced functions to support the Italian Navy operations,” Lorenzo Mariani, managing director MBDA Italia, added. 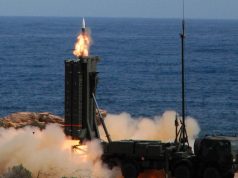