The US Air Force Research Laboratory (AFRL) disclosed it successfully completed the sixth flight test of the XQ-58A Valkyrie, which saw the low cost, high performance unmanned air vehicle (UAV) demonstrator release a payload from its internal weapons bay for the first time ever.

According to AFRL, the test took place on March 26, at Yuma Proving Ground, Arizona, and achieved several other milestones.

The test was carried out in partnership with Kratos UAS, the UAV manufacturer, and Area-I, the manufacturer of the air-launched ALTIUS-600 small unmanned aircraft system (SUAS) that was released from the internal weapons bay of the XQ-58A.

Kratos, Area-I and AFRL designed and fabricated the SUAS carriage and developed software to enable release. After successful release of the SUAS, the XQ-58A completed additional test points to expand its demonstrated operating envelope.

“This is the sixth flight of the Valkyrie and the first time the payload bay doors have been opened in flight,” said Alyson Turri, demonstration program manager. “In addition to this first SUAS separation demonstration, the XQ-58A flew higher and faster than previous flights.”

The XQ-58 is part of AFRL’s Low Cost Attritable Aircraft Technology (LCAAT) portfolio, designed to serve as an escort for the F-22 or F-35 as a runway-independent, reusable “wingman” UAS controlled by the parent aircraft for a range of missions.

Valkyrie previously took part in a test that brought the USAF a step closer toward achieving a military Internet of Things as it managed to share data for the first time between fifth-generation aircraft.

During the test on December 9, 2020, XQ-58 served as a “translator” between a Marine Corps F-35B variant and the Air Force F-22 Raptor, enabling the fifth-generation fighters to overcome long standing connectivity limitations to share actionable operational data in their native secure digital “languages” for the first time. You can read more about the test here.

It is worth noting that Kratos Unmanned Aerial Systems was also one of three companies, alongside Boeing and General Atomics Aeronautical Systems, selected to deliver missionized unmanned combat air vehicle prototypes for the Air Force’s Skyborg program by May 2021.

The aim of the Skyborg Vanguard program is to integrate autonomous attritable unmanned air vehicle (UAV) technology with open missions systems to enable manned-unmanned teaming. Skyborg is expected to provide the foundation on which the Air Force can build an airborne autonomous ‘best of breed’ system that adapts, orients, and decides at machine speed for a wide variety of increasingly complex mission sets. 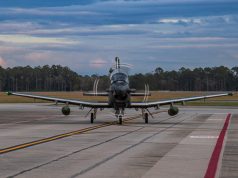