The US Air Force’s new F-15EX fighters will officially be named Eagle II, the service announced in a ceremony at Eglin Air Force Base on April 7.

The new fighter was named after the first airframe, serial number 20-0001, was delivered by Boeing in March this year.

“Undefeated in aerial combat, the F-15 Eagle epitomized air superiority in the minds of our enemies, allies, and the American people for over 45 years, but it was not meant to fly forever. We heard the demand signal from our warfighters,” said Lt. Gen. Duke Richardson, Office of the Assistant Secretary of the Air Force for Acquisition, Technology Logistics Military Deputy.

“I’m pleased to say we’ve responded boldly and decisively, with a proven platform that’s modernized and optimized to maintain air superiority now and into the future.”

The first of the 144 Eagle IIs that the air force plans to acquire at the moment was flown to Eglin Air Force Base, Fla. for testing last month. A second airframe will be delivered to Eglin by the end of April 2021.

The delivery of the heavily-upgraded F-15 followed the aircraft’s first flight in February this year. What is more, the first airframe was delivered a little under eight months after the first contract award to Boeing in July 2020.

A $1.2 billion covered the delivery of the first eight F-15EX fighter jets, including support and engineering costs.

The new fighter is a two-seat aircraft—though operable by a single pilot—with fly-by-wire flight controls, digital cockpit displays, and advanced avionics systems. It features the Eagle Passive/Active Warning and Survivability System, an electronic warfare upgrade that is also being fielded on F-15E models.

The air force says the F‑15EX provides a cost-effective and expedient solution to refresh the F‑15C/D fleet and augment the F-15E fleet to meet National Defense Strategy capability and capacity requirements.

Aircraft in Lots 2 and 3 are on track for delivery in FY 2024 and FY 2025 to Kingsley Field and Portland Air National Guard Bases, both in Oregon.

Currently, the 173rd Wing at Kingsley Field serves as the F-15C/D training school and will assume the same role for the F-15EX. The 142nd Wing at Portland will be the first operational unit to fly the aircraft. 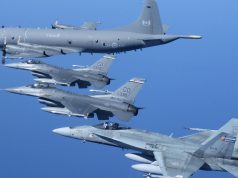