The Royal Navy has successfully tested a new missile system designed to protect the UK’s new aircraft carriers from attacks by swarms of small boats.

During operations in the Pacific Ocean with the UK Carrier Strike Group, HMS Defender’s Wildcat helicopter of 815 Naval Air Squadron fired the Martlet lightweight missile at an inflatable target in the sea – known in the navy as the big red tomato.

It is the first time this type of missile has been launched on frontline operations by the Royal Navy after rigorous testing at ranges off the UK coast by the Yeovilton-based Wildcat Maritime Force last year.

In 0.3 seconds, the missile detached from the Wildcat HMA Mk2 helicopter, accelerating to one and a half times the speed of sound towards its target.

The purpose of the missile system is to add another layer of protection around the Royal Navy’s aircraft carriers, with the Wildcats able to carry up to 20 of the laser-sensor missiles that can be used against stationary and moving targets.

Captain James Blackmore, Carrier Strike Group’s Air Wing Commander, said: “Martlet is a new air to surface lightweight multi-role missile recently introduced into service for the Wildcat helicopter and provides an offensive and defensive capability against small boats and maritime targets that may pose a threat to the Carrier Strike Group.

“This first firing during an operational deployment not only gives confidence in the end to end weapon kill chain but also offers an overt demonstration of one of the many strike capabilities provided by the Air Wing from within the Task Group.”

Developed by Thales in response to the Royal Navy’s “Future Air-to-Surface Guided Weapon (Light)” requirement, the Martlet has suffered significant delays and is now expected to reach full operational capability by 2024. Development of the missile began in 2008.

In another operational theater, and in another first for the navy, frigate HMS Argyll successfully managed to control an uncrewed Pacific 24 rigid inflatable boat (RIB) while sailing at sea.

The week-long tests, held by the navy’s innovation experts NavyX and industry partners BAE Systems, saw the Type 23 frigate take command of the RIB while it zipped along the water.

The boat’s onboard cameras and sensors gave constant feeds to Argyll, with a temporary operating centre set up in the ship’s hangar.

But in another first, the RIB’s control system was also integrated into the ship’s ops room meaning it could be controlled and commanded from the depths of the frigate.

As well as operating the Pac24 from up to 10 miles away, the ship was able to successfully send instructions to the boat for it to carry out autonomously such as conducting basic missions, identifying targets on the water and cueing its camera and remote weapon station to tracked targets when operated by the trials team. 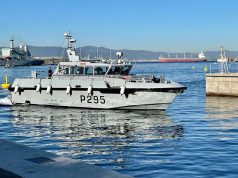