The US Navy has awarded Northrop Grumman a $153 million contract for full rate production (FRP) of lots 10 and 11 of the AGM-88E2 Advanced Anti-Radiation Guided Missile (AARGM).

The contract includes production of missiles for the US Navy and German Air Force.

AARGM is compatible with both US Navy and Air Force fighter aircraft and is currently being integrated onto the German Tornado fighters. The country ordered the first AARGM missiles in 2019 and later contracted Panavia Aircraft GmbH, the builder of the Tornado fighter, to integrate the missile onto the aircraft for an enhanced suppression of air defenses (SEAD-X) capability.

“As threats continue to evolve, AARGM remains an affordable solution to continue protecting the US Navy and our allies with their critical missions every day,” said Gordon Turner, vice president, advanced weapons, Northrop Grumman. “The ability to detect and defeat the rapid proliferation of today’s surface-to-air-threats, while remaining out of harm’s way, is paramount to mission success.”

Northrop Grumman has produced more than 1,500 AARGM missiles for the international cooperative acquisition program with the US Navy (serving as the executive agent) and the Italian Air Force.

Northrop Grumman also is developing the Advanced Anti-Radiation Guided Missile – Extended Range (AARGM-ER) in partnership with the US Navy. The missiles was cleared to enter production, after completing its first live-fire test in August this year.

The AARGM-ER will include a new rocket motor and warhead to provide an advanced capability to detect and engage enemy air defense systems.

AARGM is currently deployed with the US Navy and US Marine Corps on the F/A-18C/D Hornet, F/A-18E/F Super Hornet, and US Navy and Royal Australian Air Force EA-18G Growler aircraft. It is also integrated on the Italian Air Force’s Tornado Electronic Combat aircraft. 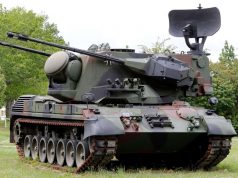