The Pentagon has awarded Northrop Grumman a task order to reconfigure four US Air Force EQ-4 Block 20 Global Hawk aircraft for use in the SkyRange fleet of testing vehicles.

The SkyRange program will equip the four high-altitude, long-endurance EQ-4 aircraft with sensors to demonstrate an alternative data collection support system to support the testing of US hypersonic systems.

Modifications of the Block 20 jets are expected to occur at Northrop Grumman’s Grand Sky facility near Grand Forks, North Dakota.

SkyRange Global Hawks are designed to supplement or replace traditional data collection assets, such as ships that are used for hypersonic flight testing.

In addition to Global Hawks, SkyRange will employ MQ-9 Reaper UAVs to support the hypersonic tests. Initial sensor capabilities installed on the aircraft include telemetry, an airborne telescope to characterize vehicle surface conditions and a system to measure atmospheric conditions. Additional test support applications and sensors are being considered. TRMC developed the two unmanned systems in cooperation with the Arnold Engineering Development Complex at Arnold Air Force Base.

SkyRange will be the latest role for the Global Hawk drone, which has been providing high-altitude, long-endurance ISR capability to the US Air Force since 2011. Most recently, the company was awarded a contract to introduce dynamic inflight rerouting for the Global Hawk via the Dynamic Mission Operations (DYNAMO) software update. This will enhance Global Hawk’s ability to provide critical intelligence, surveillance, and reconnaissance data to geographic combatant commanders. 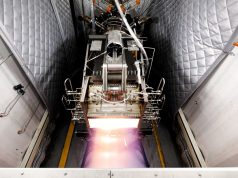