The January 23 flights repeat the record for the number of Chinese warplanes flying in Taiwan’s ADIZ from October last year. In 2021, China first sent a record-breaking 38 aircraft into Taiwan’s ADIZ on October 1, before setting a new record just a day later with 39 flights in a single day.

Taiwan’s defense ministry noted it scrambled aircraft, issued radio warnings and deployed air defense systems to respond to the activities. Taiwan is responding to activity in its ADIZ, which is airspace extending beyond its air space, to secure time for its defense assets to respond to hostile actions.

The operations are also putting a strain on Taiwan’s military, as it has to scramble aircraft to respond to the flights. The island’s air force lost two F-5 fighters in 2021 and one in November 2020.

More recently, the Taiwanese Air Force lost one of its F-16V single-seat fighter jets that was on a regular training flight from Chiayi Air Base on January 11. 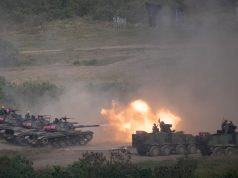