The US Air Force took another step in the effort to modernize the electronic warfare (EW) capabilities of the F-16 fleet advancing a multi-million dollar contract modification award for the F-16 Integrated Viper Electronic Warfare Suite (IVEWS).

On March 10, the Fighters and Advanced Aircraft Directorate issued an Unpriced Change Order (UCO) modification to Northrop Grumman for the work.

The award follows a $40 million Other Transaction Agreement (OTA) modification award the company received in June 2021 to develop an IVEWS environmentally and safety of flight certified prototype.

Over the next 18 months, Northrop Grumman will complete IVEWS development and install the system on several F-16s for flight testing.

“This contract and overall program effort is vital to increase the protection of our F-16 operators as they execute their missions in contested environments,” said Maj. Charles Prichard, Chief of Electronic Warfare Integration within the directorate’s F-16 System Program Office. “In order for the F-16 Viper to meet assigned mission sets in line with the CSAF’s Fighter Roadmap and operate in certain environments, the fleet needs an advanced electronic warfare (EW) system. IVEWS lines up with HAF/ACC’s EW plan and recently became the solution that improves the F-16’s survivability and lethality against current and emerging threats.”

Also referred to as AN/ALQ-257, IVEWS provides a next generation EW system that is internal to the F-16 and interoperable with the on-board APG-83 Active Electronically Scanned Array (AESA) radar. It is designed to Open Missions Systems requirements and provisioned for long-term growth capability to support future upgrades such as the Fiber Optic Tow Decoy, Adaptive/Cognitive Processing, and Open System Architecture compliance.

“IVEWS had a fantastic year, moving from lab prototype to flight demonstration,” added Col. Tim Bailey, F-16 System Program Manager. “It has become Air Combat Command’s F-16 advanced fleet solution and a ‘must have,’ top priority program. “IVEWS will keep the Viper relevant and lethal throughout its extended service life. We are thankful for the unique and collaborative partnership with Northrop Grumman and other stakeholders who continue to accelerate and solve the most complex problems our warfighters face.”

The production and fielding of IVEWS is expected to begin in 2024.

US Air Force announced the IVEWS contract award after revealed it would upgrade 608 F-16 fighter jets, comprised of Blocks 40 and 50, in one of the largest modernization efforts in its history.

The aircraft will undergo up to 22 modifications designed to improve lethality and ensure the fourth-generation fighter remains effective in meeting current and future threats. 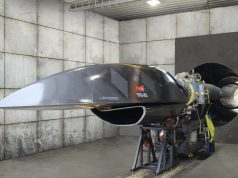