Raytheon Australia, Austal and BMT have joined forces in a bid to secure a contract for the delivery of a new littoral maneuver vessel for the Australian Army.

The teaming is envisioned with Raytheon as prime contractor, Austal as the shipbuilder and BMT as ship designer.

BMT said in 2019 it would offer its Caimen 90 design for Australia’s landing craft program while Austal confirmed its interest in 2021. The two companies appear to have now joined forces to compete against Navantia, which also announced it would bid for work under the program with its Kodal 75S design.

The new vessel that will be delivered under LAND 8710 Phase 1 is expected to be introduced from 2026. The landing craft will have to fit inside the well decks of Royal Australian Navy’s two Canberra-class landing helicopter docks and be capable of transporting an M1A2 Abrams main battle tank.

Australian defense minister Linda Reynolds said in 2021 that the vessels would be larger, faster, and better protected to support ADF operations than the army’s existing LCM-8 landing craft and LARC-V amphibious vessels.

With two separate fleets to be acquired, the watercraft will provide independent shore-to-shore, ship-to-shore, and over-the-shore capabilities to better maneuver and sustain the ADF in littoral and riverine environments. 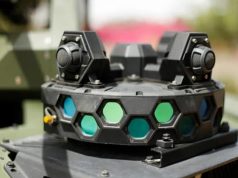