New Zealand will be sending another 120 New Zealand Defence Force personnel to the United Kingdom to help train Ukraine soldiers, as part of an international effort to help the country continue to defend itself against the Russian invasion.

It follows a completed deployment of 30 NZDF personnel in May to train Ukrainian military personnel in operating artillery, and is part of a series of actions to date that includes over NZ$40 million in financial support and the sanctioning of 840 individuals and entities.

The deployment will travel via commercial flights to the UK in tranches over the next three weeks and will be deployed until 30 November. They will join other partner nations in contributing to UK’s effort to train 10,000 Ukrainian personnel.

“New Zealand has been clear that we will continue to answer the call of Ukraine for practical support as they defend their homeland and people against Russia’s unjustified invasion,” Prime Minister Jacinda Ardern said.

“We know that one of the highest priorities for Ukraine right now, is to train its soldiers, and New Zealand is proud to stand in solidarity alongside a number of other countries to answer that call,” Jacinda Ardern said.

The deployment will enable two infantry training teams to equip Ukrainian personnel with the core skills to be effective in frontline combat including weapon handling, combat first aid, operational law and other soldier skills.

“This deployment also provides an opportunity for NZDF personnel to gain valuable experience through conducting core soldier skills in a foreign environment, alongside key partners, which promotes retention in our defence workforce,” Peeni Henare said.

“The infantry training provided aligns well with the skills and capabilities of our personnel.

“The training will be conducted exclusively at one of four locations in the UK and our NZDF personnel will not enter Ukraine,” Peeni Henare said. 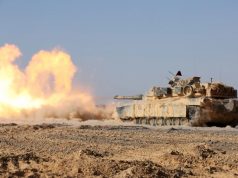 US mulls sending tanks to Ukraine, urges allies to do same, report