The US Navy and Raytheon Missiles & Defense recently carried out two StormBreaker test bomb releases from an F-35B fighter at .9 Mach.

These trials mark the fastest release to date from an F-35 and complete a seven shot rate capture series, which allows the F-35B test program to move onto the weapon capability testing phase.

“No other fielded air-to-surface weapon can accomplish what StormBreaker can against complex targets in contested environments,” said Paul Ferraro, president of Air Power at Raytheon Missiles & Defense. “Tests like these continue the progress on integrating StormBreaker into fifth generation platforms in an effort to get this much needed capability to US and allied warfighters as soon as possible.”

Raytheon says that although the smart weapon is small, the combination of its shape charge jets, fragmentation and blast charge effects, and an option for a delayed smart fuze, are powerful enough to defeat tanks.

During the tests, the two weapons, deployed within thirty minutes of each other, successfully released and performed the required flight behaviors, Raytheon said.

The US Air Force declared initial operating capability of StormBreaker on the F-15E Strike Eagle in 2022, after the fighters marked the first operational use of the new bomb in late 2021. The program’s integration roadmap includes further expansion to additional manned and unmanned platforms, including the US Navy’s F/A-18 Super Hornet.

SmartBreaker also has its first international customer, after Norway announced this summer it would buy the bomb for its fleet of F-35 fighters. 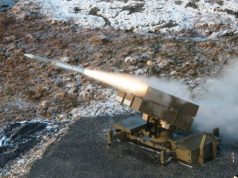