The United Kingdom will be joining the European Union’s military mobility project at the invitation of the Netherlands.

Hosted as part of the Permanent Structured Cooperation (PESCO) initiative, the military mobility project makes it possible for personnel and equipment to travel freely through the EU by road, rail, sea or air.

As the project initiator, the Netherlands officially invited the United Kingdom to join as a partner at the Foreign Affairs Council of Defense Ministers that took place on November 15.

“I am very pleased with this positive decision by the Council. We are sending the official invitation to London this afternoon,” said Minister Kajsa Ollongren.

Her British colleague Ben Wallace described the project as crucial for EU-NATO cooperation. According to Wallace, cooperation with European partners ensures greater European security. He also called it a joint determined support for Ukraine.

This project is part of a broader set of initiatives to improve military mobility, both within the EU, NATO, and not least at the national level. The strategic platform offered by the project allows the capitals to stay in close contact with each other and coordinate on matters related to military mobility.

Launched in early 2018, the project is designed to function as a forum for alignment of actions taken at the national level, as well as aligning these actions with the EU-wide efforts. In this project, 24 EU member states synchronize national actions, share best practices and discuss new ways for practical progress on military mobility.

In May last year, United States, Canada, and Norway became the first three non-EU states to join the project. This was also the first time countries outside the EU joined any PESCO project. 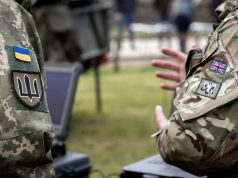