The Norwegian Defense Materiel Agency (NDMA) has signed a contract with the Polish company Mesko for the purchase of Piorun man-portable air defense systems (MANPADS).

Worth approximately NOK 350 million (USD 35M), the contract from November 29 will se the Norwegian Army receive first systems as early as 2023.

“This is the first time that Norway will operate this type of air defense systems, and the Norwegian Armed Forces will therefore receive an important capability that they have previously not had in their inventory. This is also the first time we have signed a major contract with Polish defense industry, reflecting positive developments in Norwegian-Polish defense cooperation,” defense minister Bjørn Arild Gram said.

NDMA plans to deliver several new and upgraded types of air defense systems to the Norwegian Armed Forces next year to help defend against air threats at various altitudes and ranges. The new Piorun MANPADS will cover the lowest level, being able to fire heat-seeking missiles at drones, helicopters, and aircraft from ground level up to altitudes of 4,000 meters.

“Piorun will supplement the Army’s new tactical air defenses and the Air Force’s NASAMS and F-35 combat aircraft. Along with other capabilities in the Norwegian Armed Forces, Piorun will serve as a deterrent to any future opponent who will now have to deal with a wide range of defensive systems. We therefore consider this an important addition to our overall capabilities,” Gro Jære, director general of the NDMA, added.

Work on the MANPADS procurement started in the autumn of 2021 and has since then gone through two rounds of tenders and months of close dialogue and subsequent negotiations with the relevant suppliers.

“We received very good offers from several suppliers but decided that Piorun offers the best combination of in terms of time, performance and cost. It can be delivered relatively quickly, it meets the requirements for function and performance, and it also delivers well in terms of cost,” says Brigadier General Jarle Nergård, chief of air systems at the NDMA.

Piorun is designed to destroy aircraft, helicopters, UAVs and winged rockets. The missile has a fuse equipped with a proximity sensor, while a modernized launcher features an additional day sight and a thermal vision sight. The system weighs just under 20 kilograms and has a range of 6.5 km at altitudes of up to 6 km.

This is the second export success for the system in a little over two months, as Estonia placed a contract for 100 launchers and 300 missiles in September this year. Piorun has been in service with the Polish armed forces since 2017. 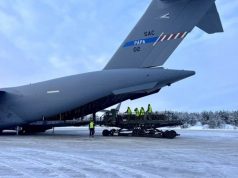