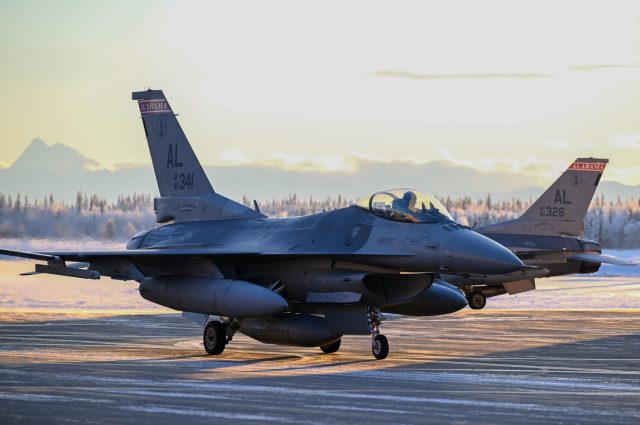 Landing in Alaska on January 12, these aircraft are the first scheduled to arrive throughout 2023 to replace the aircraft currently assigned to the 18th Aggressor Squadron. The squadron has been flying the F-16C since the 1990s.

“The Air Force is using a great opportunity to recapitalize investments made by the National Guard and upgrade the capabilities of the current Aggressor fleet,” said Lt. Col. Chad Richards, 354th Operations Group deputy commander. “This is going to provide more capability and realism so that the aircraft and the pilots that are being trained here in the JPARC (Joint Pacific Alaska Range Complex) can have a better adversary and they can train to a higher quality threat.”

The upgraded avionics in the aircraft allow the Aggressors to replicate advanced threats and provide realistic training to Department of Defense and partner nation aircrews in exercises like Red Flag-Alaska. Combined with the more than 75,000 square miles of airspace in the Joint Pacific Alaska Range Complex, Eielson is a hub of training for advanced airpower operations.

“The updated aircraft are going to amplify their efforts and produce even more valuable training to all of our partners and allies,” said Richards. “We’re able to offer unparalleled training, both to the United States Air Force, our joint partners, as well as many partner nations across the Pacific. I’m looking forward to seeing what the aggressors get to do with them and how we make our Air Force stronger.”