The contract comes as the company continues with industrial qualification tests in collaboration with the DGA and the French army. The first of the upgraded prototype tanks was delivered to the DGA at the end of 2022, and the first 18 operational tanks will be delivered to the Army in 2023.

Nexter is working on the tank update under a contract from June 2021.

The main objective of this update is the integration of the Leclerc main battle tank, known as “XLR”, into the Scorpion collaborative warfare system with a new combat information system (SICS).

The XLR is equipped with the Contact radio and the vetronics common to Scorpion vehicles.

The new tanks will also feature enhanced protection against mines and rockets, an added 7.62 mm remotely operated turret for urban combat, as well as a new fire control system with the ability to fire ammunition with a programmable effect or trigger.

The Leclerc main battle tank has been deployed by the French Army in overseas operations in Lebanon, Estonia and very recently in Romania. Nexter has been maintaining it in operational condition in the Army’s training parks since the implementation of a vertical support contract in 2010.

The Leclerc tank is a 3rd generation 60-ton class tank. Its crew is composed of 3 operators: the tank commander, the gunner and the pilot. It is armed with a 120 mm smoothbore gun and a 12.7 mm coaxial machine gun.

The French Army plans to upgrade 200 Leclerc tanks by 2029. They will be the service’s main MBT until the first tanks developed as part of the Franco-German Main Ground Combat System (MGCS) program start arriving in the 2030s. MGCS is poised to replace the German Leopard 2 main battle tank and the French Leclerc tanks. 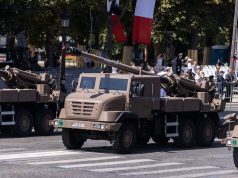