NATO has received the first part of the mobile deployable component of the Alliance Ground Surveillance (AGS) system with the arrival of the Mobile General Ground Station (MGGS) to Sigonella, Italy.

The mobile exploitation station is part of the AGS system which includes five remotely piloted RQ-4D Phoenix aircraft, developed and produced specifically to NATO’s requirements, as well as mobile and transportable ground segments.

The MGGS arrived in Italy earlier this month with personnel now set to begin familiarization and training.

The first NATO RQ-4D aircraft arrived in Italy from the US, where it was developed and built by Northrop Grumman, in November last year.

A second arrived in December 2019 and a test flight over the Mediterranean Sea was performed in March of this year. NATO expect to achieve initial operational capability with the system in 2020. 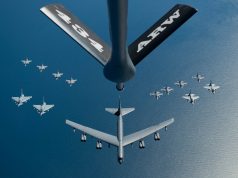