The US Navy has started flight tests with MQ-8C Fire Scout unmanned helicopters equipped with the new Leonardo AN/ZPY-8 radar.

The tests are supported by Northrop Grumman, the aircraft system developer.

Operating out of Webster Outlying Field, the MQ-8C’s first flight with the radar occurred Feb. 27. Testing began with several weeks of ground test prior to the first flight and continues to progress as the navy and Northrop Grumman consider mission expansion opportunities for the platform.

To date, Northrop Grumman has delivered 32 of 38 MQ-8Cs to the Navy, all of which will be retrofited with the AN/ZPY-8 radar. The MQ-8C achieved initial operational capability in June 2019 and is scheduled for its first deployment in 2021.

The Fire Scout recently also completed dynamic interface tests with expeditionary sea base ship USS Hershel “Woody” Williams, the navy’s fourth special operations and mine countermeasure support ship. The testing is part of a broader undertaking to demonstrate the future concept of operations for unmanned helicopters aboard the ships of the class. 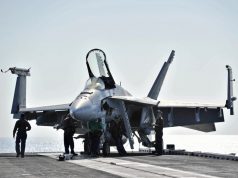