The US Army has awarded General Dynamics Ordnance and Tactical Systems a contract worth over $3.4 billion for the delivery of Hydra-70 rocket systems.

Deliveries under the contract are scheduled to be completed by September 2026.

Hydra is a 2.75 inch folding fin aerial rocket system, originally designed by the navy after World War II to replace the 5 inch rocket system. It was used by the navy, marines and the air force in tactical air to ground roles during the Korean War, Vietnam and in the Middle East.

The latest system configuration was fielded in the 1980s as the Hydra-70 rocket system. The word Hydra refers to the nine-headed serpent of Greek mythology and symbolizes the multiple warhead configurations available. The 70 indicates the number of millimeters when converted from 2.75 inches.

The rocket system contains three components: the MK66 MOD 4 rocket motor, one of the nine warheads, and the associated point-detonating, omni-directional, remote-set fuze(s). A non-explosive round is available for training purposes as well.

Hydra-70 fires from the existing seven and 19-tube launchers and can be mounted on most rotary and fixed-wing aircraft, including Apache, Cobra and F-16. 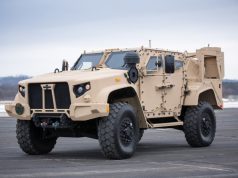 Oshkosh gets $888M order for JLTV deliveries to US Armed Forces