Anzac recently sailed to her homeport of Fleet Base West, Garden Island, Western Australia, where she was joined by her sister ship Arunta who completed the program, known as AMCAP, in 2019.

While the overhaul of the first ship took almost 20 months to complete, the navy says the lessons learned will help the other ships in the class complete the process faster. HMAS Anzac’s upgrade was completed in 81 weeks, some two months faster.

“The aim of AMCAP is to ensure our frigates remain at the forefront of regional surface combatant capability until the new Hunter-class frigate is introduced into service later this decade,” Captain Clelland said.

“AMCAP consists of three major elements, the most striking is the new air search radar that visually differentiates a post-AMCAP ship from its pre-upgrade counterparts.

“The program also focuses on a significant upgrade of the ship’s communications facilities, as well as a general platform systems remediation (PSR) program.”

The PSR will see the upgrade of systems such as propulsion control, fridges, waste management and water production.

The third ship to undergo AMCAP is HMAS Warramunga, which is currently docked at Henderson Shipyard.

The upgrade program is being undertaken by Navy and the Warship Asset Management Agreement which is a four-way alliance between the Commonwealth’s Capability Acquisition and Sustainment Group, Saab Australia, BAE Systems and Naval Ship Management Australia. 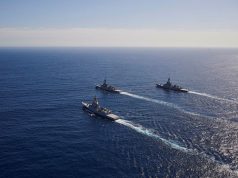 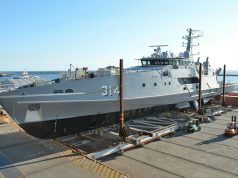