The Italian Air Force has taken delivery of its final Eurofighter Typhoon aircraft which took off from Leonardo’s plant in Caselle, Turin, on October 23.

The ceremony was attended by the Chief of Staff of the Italian Air Force, Gen. Alberto Rosso, the CEO of Leonardo, Alessandro Profumo and the Aircraft Division Managing Director, Marco Zoff.

“The delivery of the last aircraft, which completes the Eurofighter fleet, is the main asset of a complex and diversified national and NATO air defense system, is a major program milestone,” Italian Air Force Chief of Staff, Gen. Alberto Rosso said at the hand-over ceremony of the aircraft, which is destined to the Italian Air Force’s 51st Wing Istrana Air Base.

The Eurofighter is being delivered by a four-nation consortium comprising the UK, Germany, Spain and Italy. The program is managed by the Eurofighter GmbH consortium, a company based in Munich (Germany) owned by Leonardo, BAE Systems and Airbus Defense & Space. In addition to the four partner countries, which have already ordered 472 Typhoons, international customers now include: Saudi Arabia (72 aircraft), Austria (15), Oman (12), Kuwait (28) and Qatar (24), a total of 623 ordered planes.

Germany and Spain are upgrading their aircraft with modern AESA radars in cooperation German defense technology company Hensoldt while the UK defense ministry contracted BAE Systems and Leonardo for the undertaking. 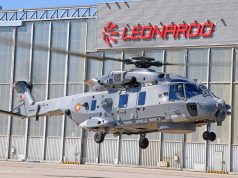 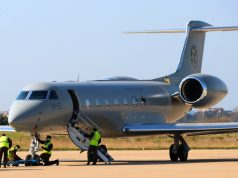