The Israeli Air Force has taken delivery of a unique experimental F-35I Adir aircraft which arrived at the IAF Flight Testing Center (FTC) at Tel-Nof air force base on November 11.

Designated specifically for flight experiments, the F-35I will be instrumental in allowing the IAF to integrate certain indigenous technologies into the F-35.

“With the new addition of the ‘Adir’ to the lines of experimental aircraft in the Israeli Air Force’s FTC Squadron, we are witnessing a historic event, the magnitude of which cannot be underestimated – a meaningful corner stone in the IAF’s inauguration and development of the F-35 division”, said Brig. Gen. Oded Cohen, Commander of Tel-Nof AFB.

In the majority of the acquisitions made in cooperation with the United States, the IAF is given the opportunity to install its own electronic warfare, communications and weapons systems – all to accommodate the platforms to the relevant operational needs and requirements. For the F-35I, the situation is more complicated: “In the ‘Adir’ program, the IAF doesn’t have access to everything, and cannot fully intervene”, described Lt. Col. Y, Commander of the FTC Squadron.

“The experimental F-35I will act as the main building block for acquiring new flight capabilities, and allow for independent installation of munitions,” Lt. Col. Y. continued. “New weapons affect the aircraft in different ways. We run an entire series of tests to certify a capability, such as load testing, fluttering, and release fluency.”

In the near future, concurrent with the integration of the aircraft, American teams from “Lockheed Martin” will arrive at the squadron to deliver system instructions to its personnel. “The ‘Adir’ speaks a different language, one that we must connect with and learn to understand”, mentioned Maj. Manny and Lt. Col. Y added: “The IAF knows how to operate the “Adir”, but does not yet know how to operate an experimental model. We need to receive the relevant knowledge in order to operate the aircraft and fly it prior to the testing process”.

“The test ‘Adir’ model is the first-ever to be manufactured in the United States, per our request. Now, they will likely produce additional aircraft based on the current model for themselves,” he concluded. 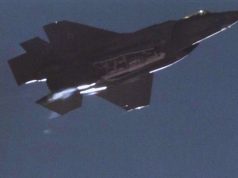