Dubbed as the Carrier Strike Group 2021 deployment, the undertaking will mark Britain’s return to aircraft carrier operations after its last aircraft carrier, HMS Illustrious, decommissioned in 2014.

The joint declaration enables the deployment of US Marine Corps and US Navy personnel and equipment with the carrier strike group. US Marine Corps F-35B Lightning II aircraft will operate from the flight deck of the carrier, while the guided-missile destroyer USS The Sullivans (DDG-68) will provide protection for the group.

“The leaders look forward to seeing the culmination of nearly a decade of U.S.-UK carrier cooperation when Carrier Strike Group 2021 sets sail from Portsmouth, UK later this year,” a Pentagon announcement on the declaration said.

The Netherlands previously announced that it would deploy an air-defense frigate with HMS Queen Elizabeth, which will sail to the Indian Ocean and East Asia for exercises with the US and Japan off the Nansei Islands chain in southwestern Japan. The carrier is also expected to pay a visit to Japan during the deployment.

In preparation for the upcoming deployment, US F-35B fifth-generation fighters already spent some two months flying out of Royal Air Force base Marham and operating with the aircraft carrier last fall. The fighters were also on board during one of the major NATO exercises, Joint Warrior, when the Royal Navy assembled its carrier strike group for the first time. 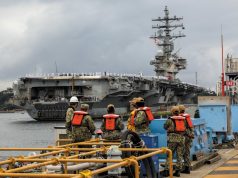 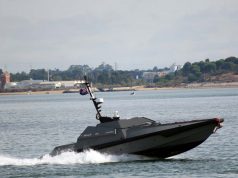