The Royal Air Force detachment deployed to Romania for the NATO enhanced Air Policing Mission has been relieved by their Royal Canadian Air Force counterparts.

The RAF’s 121 Expeditionary Air Wing has been based at Mihail Kogalniceanu Air Base, near the Black Sea Coast in Romania to support the Romanian Air Force’s own Quick Reaction Alert to conduct the mission.

During the RAF deployment, the Typhoons of RAF Lossiemouth based IX (Bomber) Squadron launched nine times against suspect aircraft.

The incoming Canadian detachment, of approximately 150 personnel and known as the Royal Canadian Air Force-Air Task Force Romania, will be operating six CF-188 Hornet. The Hornets come from 409 (Tactical) Fighter Squadron and are usually based at Cold Lake Air Base in Canada. Canadian Hornets will spend the next three months safeguarding the skies of the NATO Air Command’s southern region.

This is the sixth time the Canadian Armed Forces have deployed an air task force to Romania as part of operation Reassurance, the Canadian operation name for their participation in NATO Air Policing missions. 409 Squadron last deployed to Romania in 2017.

In addition to the Quick Reaction Alert scrambles, the Royal Air Force used their time in Romania to train with various other allied and partner forces. This included air defense exercises with NATO warships, close air support with land forces and air combat training with other NATO air forces.

121 Expeditionary Air Wing was also joined by the German Air Force’s 71st (Richthofen) Wing in June, to further the interoperability of the two nations’ Typhoon fleets. This period saw the German Eurofighters join the RAF Typhoons and Romanian MiG-21 Lancers conduct a joint training scramble, which was the first of its kind.

When the UK’s Carrier Strike Group was in the Mediterranean, 121 Expeditionary Air Wing Typhoons were able to conduct air combat training with F-35B Lightnings from the US Marine Corps and RAF over the Black Sea and also exercise with HNLMS Evertsen and HMS Defender.

One recipient, Warrant Officer Class 2 Murley of the Royal Engineers, deployed as the Facilities Manager.

“I’m very humbled to receive such an award which shows the work carried out on Operation BILOXI has not gone unnoticed, and I couldn’t ask for more to show the appreciation of our efforts,” said Warrant Officer Class 2 Murley of the Royal Engineers, one of the recipients. 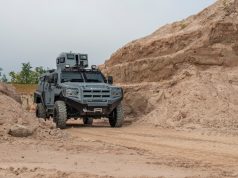