Aircraft carriers from France, Italy and the United States will begin a large-scale exercise in the Mediterranean Sea next week as Russia’s fleet of amphibious landing ships is approaching the region.

USS Harry S. Truman, along with it’s carrier strike group and air wing will be the defense department’s primary contribution to the exercise. The exercise will be led by US Navy Vice Adm. Eugene H. Black III, who serves as Strikeforce NATO commander and also commander of the Navy’s Sixth Fleet.

The French Navy is taking part in the drill as part of its Clemenceau 2022 deployment that will see the country’s sole carrier operate in the region together with 9 escort vessels as well as two submarines.

“Neptune Strike ’22 is designed to demonstrate NATO’s ability to integrate the high-end maritime strike capabilities of an aircraft carrier strike group to support the deterrence and defense of the alliance,” Kirby told reporters. “The USS Harry S. Truman carrier strike group will be placed under NATO operational control and serve as the centerpiece for this long-planned activity that fosters NATO allies’ ability to cooperate and integrate effectively.”

Neptune Strike ’22 has been in the planning stages since 2020, Kirby said, though he told reporters that the current tensions in Europe due to the uncertainty about Russia’s intentions regarding Ukraine were considered when deciding whether to press on with the exercise.

“There was due consideration … given tensions right now, about our exercise posture,” he said. “After all that consideration and discussion with our NATO allies, the decision was made to move ahead.”

While Neptune Strike ’22 is not related to that Russian aggression towards Ukraine, Kirby did say the defense department remains committed to Ukraine’s ability to defend itself, and to having options available should NATO allies ask for assistance.

The exercise is taking place as a Russian task group of six amphibious warships is transiting from the Baltic Sea this week into the Mediterranean Sea. The group was escorted by the Royal Navy through the English Channel on Friday, January 21, before the French Navy took over in the Bay of Biscay.

In a Twitter post from January 22, the French military said a Loire-class offshore support and assistance multipurpose vessel had established communication with tank landing ship Korolev as the Russian task group continued towards the Mediterranean.

While the Russian defense ministry did not provide details on the planned movements of the ships, the task group could proceed to the Black Sea, from where it could be involved in any potential conflict with Ukraine.

What the Russian defense ministry did announce is a deployment of well over 100 Russian Navy ships, more than 50 aircraft, and 10,000 personnel on various drills in all areas of operations, which will include the Black and Baltic Sea Fleets.

These exercise are unrelated to the joint drill conducted by Russia, China and Iran between January 18 and 22. After wrapping up the “Chiru-2Q22” exercise in the Gulf of Oman, the Pacific Fleet task group will proceed to the Mediterranean Sea “to team up with the forces of the Northern and Baltic Fleets for a joint exercise,” the defense ministry has said.

“In accordance with a plan for training the Russian armed forces in 2022 a series of naval exercises will be held in January-February in all zones of the fleets’ responsibility under the general guidance of the commander-in-chief of the Russian Navy, Admiral Nikolay Yevmenov,” A TASS report quoted a defense ministry statement as saying.

In a related development, the Spanish Navy deployed patrol ship BAM Meteoro to the Black Sea to boost NATO presence in the Black Sea. The deployment had been accelerated due to the “deteriorating situation in the region,” Spanish officials said, adding that the option of sending fighter jets to Bulgaria was also on the table. 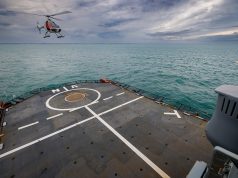 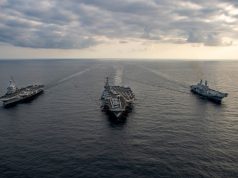