The personnel, aircraft and assets arrived from the 28th Bomb Wing, Ellsworth Air Force Base, to conduct PACAF training alongside allies, partners, and the US Indo-Pacific Command Joint Force, the service said.

The bombers are back on Guam after four B-52H Stratofortress bombers deployed to Andersen in January last year for a strategic-deterrence mission.

The rotational deployments of bombers to Guam follow the Pentagon’s decision from 2020 to end the Continuous Bomber Presence (CBP) mission on the island. April 17, 2020, marked the first time in 16 years that the air force did not have bomber aircraft on Guam.

Just like the dynamic force employment used over the last two years with US Navy aircraft carriers, the bomber redeployment to mainland US is part of the 2018 National Defense Strategy which envisioned defense assets as being “operationally unpredictable but strategically predictable.”

While not specified, the B-1Bs could be on Guam to take part in the Valiant Shield exercise, which is taking place in Guam between June 6 and 17, on Guam, the Commonwealth of the Northern Mariana Islands, Palau and at sea around the Mariana Island Range Complex.

The deployment of bombers to Guam could also be in response to concerns regarding the strategic island’s ability to defend itself from a missile attack. The US has already upped the number nuclear-powered attack submarines stationed there, with the arrival of a fifth boat in April this year.

The US Army has also trialed the Iron Dome missile defense system at Andersen AFB during a temporary, experimental deployment late last year.

Earlier this year, the 94th Army Air and Missile Defense Command (AAMDC) and Joint Region Marianas deployed a THAAD launcher and associated personnel and equipment to Rota International Airport “to gather valuable data and inform future deployments of THAAD Remote Launch packages throughout the theater,” the service said in March. 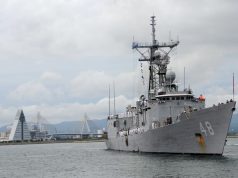