Launched in 2018, the project to develop a next-generation fighter aircraft system is led by Team Tempest, a collaboration between BAE Systems, Leonardo UK, MBDA UK, and Rolls-Royce.

The addition of new companies was announced by UK defense secretary Ben Wallace at the virtual 2020 Farnborough International Airshow (FIA Connect). The newcomers include GEUK, GKN, Collins Aerospace, Martin Baker, QinetiQ, Bombardier and Thales UK, along with UK universities and SMEs. The companies will now seek opportunities to join forces on established projects and developments with the core Team Tempest partners.

“We are delighted to have signed the first phase of these new agreements, which are transforming our traditional relationships with partners,” BAE Systems’ manufacturing director Dave Holmes commented.

On the same day the UK defense ministry announced the expansion of Team Tempest, Swedish defense major Saab revealed it would invest £50 million into a new FCAS center in the United Kingdom that would serve as a hub for Sweden’s participation in the program.

The UK and Sweden signed a MoU on FCAS co-operation in July 2019. Saab is leading Sweden’s FCAS industrial participation in close co-operation with Sweden’s Ministry of Defence. In addition to Sweden, Italy disclosed its intention to join the project in 2019.

“Saab took the decision to create a new FCAS center so that we can further develop the close working relationship with the other FCAS industrial partners and the UK Ministry of Defence,” Saab’s Micael Johansson said.

The location of center is yet to be determined, Saab added.

FCAS is a £1.9bn project aimed at developing the next generation combat aircraft, known as Tempest, which will replace the Typhoon.

The project team is working on a portfolio of over sixty technology demonstrations spanning the breadth of combat air systems that will allow Tempest to be a capable fighter in an operating environment of the coming decades.

Like the Franco-German FCAS, Tempest is expected to employ unmanned aerial systems operating as swarm drones as an extension of the manned fighter.

BAE Systems will be responsible for combat air systems and integration, while power and propulsion systems are to be developed by Rolls-Royce. Leonardo will be in charge of advanced sensors, electronics and avionics, while MBDA will explore the deployment of a range of missile systems onboard the sixth-generation fighter.

The Royal Air Force hopes to introduce the first Tempest fighter to its fleet from 2035. 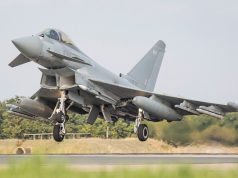