The Royal Air Force fleets of C-17 Globemaster transport aircraft and CH-47 Chinook helicopters are getting capability upgrades through contracts worth almost £400 million.

The UK’s C-17 fleet – which recently played a key role in the UK’s evacuation from Afghanistan – will receive a £324 million investment. This will upgrade software and hardware to improve airlift capability as part of a contract with the US Air Force.

Royal Air Force Mk5 and Mk6 Chinook helicopters will be receiving defensive systems, as part of a £64 million contract with Boeing Defence UK which will make them harder to detect for adversaries.

Under a separate contract, worth more than £220 million, BAE Systems will deliver advanced synthetic training for pilots training to fly Typhoon.

The investment builds on commitments outlined in the Defence Command Paper earlier this year, which confirms an operational obligation to the C-17 and CH-47 aircraft as part of the Integrated Force 2030 approach.

Negotiated by Defence Equipment and Support, the five-and-a-half-year C-17 contract will continue the support for the aircraft under the ‘Virtual Fleet’ concept, where all nine operating nations have access to a support solution.

Upgrades will include enhancements to the ‘beyond line of sight’ satellite-enabled communication equipment, a wider field of view via the ‘head-up display’ in the cockpit to help increase pilot situational awareness and widening the scope of the current free-fall parachuting capability.

The five-year Chinook helicopter contract managed by Defence Equipment and Support will see the installation of infra-red suppression systems on an unspecified number of helicopters in the fleet. The systems will offer better protection from threats posed by new missile systems using the heat (infra-red) signature of the aircraft to target. Infra-red suppression systems technology will counter with ‘blanking plates’ on the helicopters which mask the hot components and redirect airflow to cool the exhaust gases, making it more difficult to target.

The new training environments will be linked together providing an integrated environment for pilots to train and carry out complex combined training exercises using real world mission software and tactics. 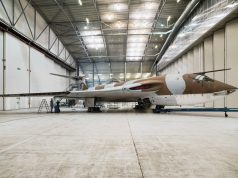 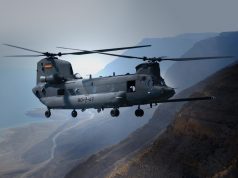