The US Air Force’s 53rd Weapons Evaluation Group at Tyndall Air Force Base, Florida recently hosted the Weapons System Evaluation Program-East that was attended by F-22 Raptors, F-16 Fighting Falcons and the US Navy’s F/A-18 jets.

Taking place between November 8 and 19, WSEP allowed aircrews to evaluate their ability to conduct air-to-air live fire missions. It afforded aircrews the opportunity to launch live missiles at threat representative, maneuvering targets while providing maintainers with experience loading live-munitions onto their aircraft.

“WSEP East allowed the Tigers to show off our air dominance as we expertly employed 12 live missiles, 9180 bullets and flew 166 sorties in support of operational and tactical training,” said Lt. Col. Lawson Cass, 79th Fighter Squadron commander. “We set the standard with 100% valid shots, proving we remain ready for any real-world combat tasking.”

“Carrier Air Wings regularly deploy to areas of responsibility with a significant Air Force presence,” said Lt. Cmdr. Tom Kellner, 83rd Fighter Weapons Squadron F/A-18 Program Manager. “Performing joint missions ahead of time gives these aircrew a sense of familiarity and enhances the joint team mentality so when we go down range we have a common understanding of service terminology, tactics, techniques, procedures, and capabilities.” ­­

A unique aspect of this WSEP iteration was the inclusion of another air-to-air exercise known as Checkered Flag, a bi-annual event maintained and executed by the 325th Fighter Wing that focuses on aircrew ability to operate in a simulated combat environment. This exercise included 93 participating aircraft, with 60 to 70 aircraft airborne at one time.

“It’s all about the synergy when it comes to executing a combined WSEP/Checkered Flag event,” said Lt. Col. Orion Vail, 83rd FWS commander. “Visiting units get the opportunity to participate in two large force training events in a joint venue that fosters interoperability and optimizes air-to-air capabilities. The data we receive from events like this help refine the tactical application of our weapons systems and benefit our emerging joint platforms.” 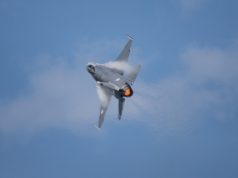 Taiwan loses contact with one of its F-16V fighters, search and rescue op underway